The blades of the samurai swords from feudal Japan are known all over the world. These blades had an elegant curve and had a sharp edge on one side.

The katana has tsuba to protect the hands and with a long handle or handle that you could hold with two hands.

During the kamakura period, the katana or samurai sword became well known, and this was closely related to the way the samurai warriors waged war.

The samurai sword is an efficient deadly weapon but also a work of art in itself. Every detail has been clearly thought through and often lags behind what you would initially expect. The blade itself is often complex and has various functions.

On this picture you can clearly find all parts of the samurai sword.

The point or point area on a Japanese sword is called the kissaki. This can look different and is often separated from the rest of the blade with a yokote line. This is a clear geometric line that separates the fan-shaped part of the tip from the blade.

The size of the kissaki varies per period. You have the o-kissaki (large), chu-kissaki (medium) and ko-klssaki (small) lengths which therefore indicate whether the point is large or small. The curvature of the kissaki is called the fukura. 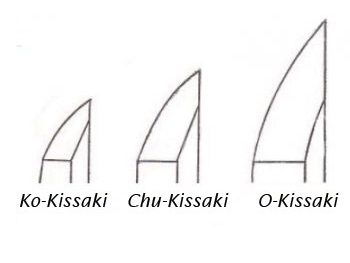 This is the backline or ridge of the blade that runs from the yokote line to the nakago or tang. The shinogi is the dividing line between the oblique portion that transforms the blade into the flat portion or shinogi-ji of the blade. This line has a strong influence on the appearance and character of the sword. The shinigo and shinog-ji are interdependent and influence the extent to which a sword is suitable for the hardness of the targets.

The higher the shinogi, the more suitable it is for hard targets and vice versa. A medium-high shinogi is the most versatile and is suitable for light and heavy purposes.

The Bo-Hi or blood groove

A groove that runs the length is called the Bo-Hi or blood groove. This ensures that the sword is lighter and therefore more agile. The term blood groove is because there are theories that once you put it into someone, a sword can draw a vacuum, which means you can pull your sword just a little slower again. A bo-hi does not cause the sword to lose much strength. The main reason for a bo-hi is a lighter and faster sword which is easier to handle. That is also the reason why the iaitos used in iaido, Shindo Munen-ryu, Kenjutsu, Battojutsu and Muso Shinden-ryu,

The mune or back

This is the back of the blade and you can see it as the back. This runs from the Mune-machi to the tip or kissaki of the blade. In some Japanese swordmanship ryu the mune is used to block. This part of the blade is the least sensitive of breaking or crumbling in contact, as opposed to the Ha or cut.

The ha or edge

This is the name for the hard cutting edge of the sword. This is opposite the mune or back. Other names for the Ha are also Hasaki or Yaiba. As soon as the samurai sword is on a stand, it is with the cut up so that it cannot be damaged in the sheath or saya. The sheath is also not damaged in the way. As soon as there is a chip or tear in the cut that passes the hamon, the sword is worthless.

Because some katanas are folded you get to see a clear pattern of layers. This is due to the folding of the steel, this often happens between 8 and 12 times. Often this is called damascus but this is actually not correct, this was a way of forging which comes from the middle east and is called Damascus in Syria.

By the way the folding pattern or hada comes to the surface you can see which forging method a blacksmith has applied. With old Japanese Nihonto this is a good indicator of which school an authentic Japanese sword comes from. These patterns often resemble wood grain, known are masame and itame hada.

Itame hada is created by folding the blade in alternating directions during the forging process. Masama hada becomes visible when the leaf is repeatedly folded in the same direction. Here you often see many layers that are clearly on top of each other.

The hamon is the transition from harder to softer steel throughout the blade of the sword. The ha or cut is then hard, so that it can also be sharpened very sharply and the mune or back is then relatively softer so that it can better cope with blows so that the blade does not break.

The hamon is created by treating the blade with clay during forging. This is also called differential hardening.

The difference in hardness is the result of the cooling process (shock) or tempering of the blade. Less or no clay ensures that the edge cools faster, making it harder, while more clay allows the core and back to cool down more slowly.

Technically the transition is from the cut or harder martensitic steel and the softer perlitic steel in the middle and the back of the sword.

The visual effect of the hamon is very interesting because you can get a lot out of it with a sword, especially if the katana is forged with complex techniques. Good polishing must have taken place so that all aspects of this are clearly highlighted. The appearance of the hamon is quite valuable, as proof of the differential hardening treatment, but also aesthetic and artistic value. That is why there are also many swords with artificial hamons, which are delivered by steel brushes, sandblasting or acid etching are offered for sale while being differentially hardened. Sometimes sellers often do not even know the clear differences. Often cheap is of course expensive for that matter.

In our webshop you can buy a real battle ready samurai sword and of course a differentially hardened japanese katana, take a moment to view them.